We have traditionally dealt with urban runoff pollution by trapping it in stormwater ponds, infiltration basins, wetlands, and related structural best management practices (BMPs).  This "end-of-pipe" approach has several problems: (1) soluble pollutants, such as chloride, are not trapped; (2) toxic pollutants, like PAHs, accumulate in sediments; (3) they require considerable maintenance; and (4) their cold weather performance has barely been studied, but is probably poor.

I have been working for several years on  the concept of "source reduction", which seeks to reduce the amount of pollutants produced before they get into storm drains. While this seems eminently sensible - potentially more effective, cheaper, and fairer - there has been surprisingly little research to learn how to implement source reduction approaches.

I have been working on two source reduction approaches.  The first is a new project to conduct road de-icing using principles of adaptive management, to minimize the movement of chloride into the environment.  This project is described just below.  The second project, now completed (but requiring follow-on research), showed that enhanced street sweeping in neighborhoods with lots of trees could reduce the amount of phosphorus moving into streams, rivers, and lakes by a third or more, and at much lower cost than trapping P in structural BMPs.

The use of road salt has dramatically increased over the past few decades.  While improving winter driving, road salt (especially chloride) has become one of the most serious urban pollutants for cities in cold climates. A 2015 MPCA study reported that salt use costs $0.4-1.2 billion per year in the Twin Cities, including costs of salt, labor, and equipment, damage to trees, and corrosion to bridges, pavement, and vehicles.  Beyond the infrastructure costs, chloride from road salt is toxic to aquatic organisms, causing nearly 80 surface waters in the Twin Cities region to be designated as “chloride-impaired”(a legal designation) or at high risk for becoming impaired.   Chloride also moves freely through soils, and hence is also accumulating in groundwater.  For some deep stormwater drains, in the Twin Cities, chloride concentrations remain at levels toxic to aquatic organisms even in mid-summer, when baseflow (groundwater) dominates the flow.

Once road salt is applied, it is nearly impossible to "trap" the chloride downstream.  Adaptive management

Removing chloride from meltwater in storm sewers is not practical, so management must focus on source reduction – reducing the amount of chloride (in NaCl) that is applied. This is easier said than done, because de-icing is needed (to some extent) to enable safe winter travel. The question then becomes: what is the minimum amount of road salt needed to both protect the environment and provide adequate transportation mobility?

In a new project sponsored by the Local Roads Research Board, Bruce Wilson and I, in collaboration with the City of Edina (Ross Bintner and Jessica Vanderwerf Wilson) proposed using an adaptive management approach to solve this problem. The idea behind adaptive management is to guide actions through continuous feedback.  In this case the “action” is road de-icing, and the feedback are “meltwater metrics”, such as melt efficiency (gallons of water melted by a lb of chloride) and event chloride load (lb Cl per event).  The key will be to provide feedback to road crews in post-event workshops, to enable continuous learning (adaptation).

The project is just starting, so we will be posting new materials as it evolves.  A first step:  several of our BBE students in a senior "capstone" project are designing a winter-tough sampler that could be installed below the storm grate, allowing us to measure chloride concentrations in real time, and thereby providing road crews with summary metrics within a day or two. 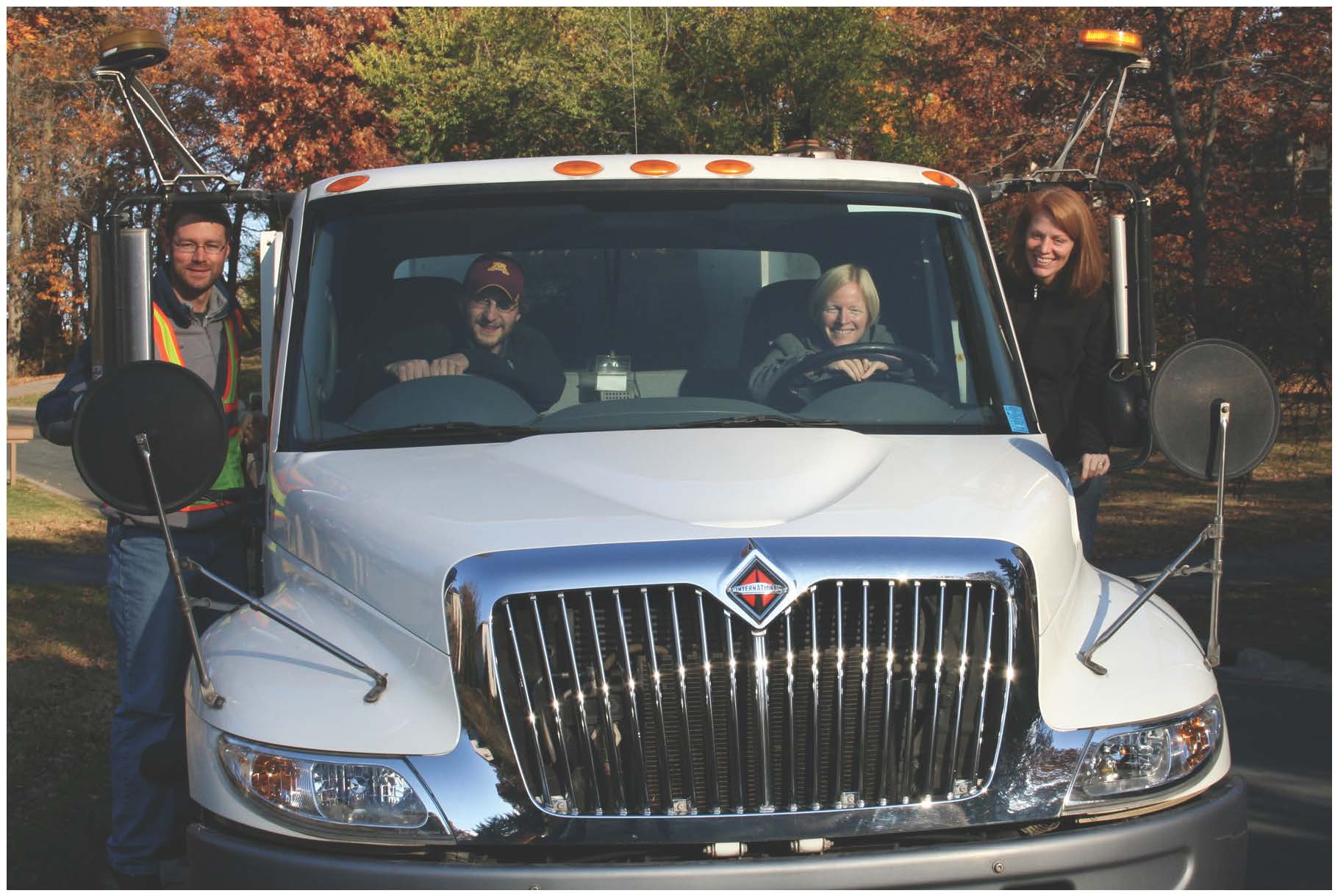 This project was completed in September 2014.  Outcomes include translational products for public works departments that are contemplating enhanced street sweeping, as well as various publications and presentations (see below).

Cities struggle to find cost-effective ways to reduce nutrient export from their streets.  Some control measures are very expensive: trapping phosphorus in stormwater ponds costs up to $500-1000 per kilogram using stormwater ponds  and $1000-4000/lb using raingardens.

In this study, we quantified nutrient load reduction that can be accomplished by street sweeping.  We hypothesized that street sweeping can be a highly cost-effective method for removing nutrients from streets, and hence from being washed into lakes, at least under some circumstances.

The project was a partnership between the City of Prior Lake and the University of Minnesota, supported by EPA and administered by the MPCA. The project team includes Larry Baker (PI) and Sarah Hobbie (co-PI and driver, below), Ross Bintner (City of Prior Lakes Water Resources Engineer, on left running board), Graduate Research Assistant Paula Kalinosky (right running board),, and Lab Technician Christopher Buyarski (co-pilot).

The study was unique  in several aspects:

(1) The study was a factorial experiment, with three levels of tree canopy cover (low, medium, and high), and three intensities of street sweeping (1x, 2x, and 4x per month).

(2) We measured nutrients in the street sweepings removed, rather than attempting to quantify reductions in stormwater nutrients, because the latter is difficult and expensive to do.  Our findings provide a basis for calculating “load reductions” required for lake restoration efforts.

(3) The sweeping period was long, covering the entire snow-free season, from March through November, and hence covers autumn leaf fall – which nearly all sweeping studies ignore.

(4) We carefully quantified costs, allowing us to compute cost-effectiveness ($ per pound of nutrient removed) for each treatment under a range of conditions (canopy cover, frequency of sweeping, for solids, N, and P).

Although this was an important study that demonstrates the potential importance of street sweeping for nutrient removal, more research is needed.  Here are three areas of additional research that are needed:

1.  The highest percent canopy cover over streets in our study was 20%.  In many older residential areas, tree canopy covers commonly exceed 50%.  Additional sampling along high canopy routes is needed to extend the relationships in our spreadsheet planning model.

2.  Ultimately, the goal of stormwater management is to improve water quality.  We hypothesize, based on our results, that enhanced sweeping could improve water quality, but this needs to be confirmed with studies at the watershed scale, ideally in a paired basin approach.

3. We also need better understanding of the pathways of nutrient flows through urban landscapes, to inform nutrient reduction strategies that are more effective and efficient that current approaches.

Planning tool: We've developed an Excel-based spreadsheet calculator "Estimating Nutrient Removal by Street Sweeping.We had originally posted this on my Wordpress-based website, but it did not migrate properly to the University's new Drupal-based website.  We're slowly developing an app, but it the meantime, please send an email to me to get a copy (free and open source), at [email protected]

Also see workshop materials (including presentation) at Stormwater U.

Kalinosky, P., L. Baker, S. Hobbie, R. Bintner. In prep. Quantifying nutrient removal during enhanced street sweeping. This article will be posted when it is accepted for publication.